Trending
You are at:Home»ISSUE 48»Nanocellulose in Japan
By admin on August 15, 2017 ISSUE 48, SUBSCRIPTION CONTENT

With forest covering approximately 70% of the country, Japan is at the forefront of cellulose nanofiber research and development. In Japan, the Economy, Trade and Industry Ministry has established a group involving both the public and private sectors. It includes Nippon Paper Industries and Oji Holdings, Toyota Auto, Mitsubishi Motors, Mitsui Chemicals, Denso, Kao Corporation and other interested companies. The Japanese government expects that the price level of nanocellulose in 2030 will be ¥500 per kilogram or lower, which is about one-tenth of the current level.
The government has set goals of making nanocellulose a material that can compete with carbon fiber in terms of pricing, and of expanding the size of the market for the new material along with related businesses to the value of ¥1 trillion in 2030. The Japanese government’s “Japan Revitalization Strategy (revised in 2014)” specifically mentions promotion of the development of CNF materials. The Revitalization Strategy 2015 specifies the development of international standards for CNFs and the promotion of their use.

Nanocellulose
Nanocellulose is a material made from wood cellulose fibers, where the individual microfibrils have been detached from each other. Compared with cellulose, the primary component of the paper we use every day, nanocellulose has a much smaller diameter (typically <10 nm) that results it many unique properties.
Nanocellulose can be obtained by disintegration of plant cellulose pulp or by the action of specific types of bacteria. Nanocelluloses can be derived from plants (e.g., wood, wheat straw, potato pulp) or via bacterial processes. Once produced, nanocellulose can be incorporated into, for example, transparent films, fibers, hydrogels, or aerogels with enhanced mechanical, thermal, and optical properties.

Nanocellulose exists in a number of forms including:

Generally, plant-derived nanocellulose is produced by the top-down mechanical and/or chemical treatment of cellulosic precursors. In contrast, bacterial nanocellulose is produced by the direct action of specific bacterial strains belonging to genus such as Achromobacter, Alcaligenes and Gluconacetobacter (previously known as Acetobacter) among which only Gluconacetobacter xylinus has been shown to produce BC at commercial production levels. NFC can be considered “spaghetti-like;” and NCC is more “rice-like”.

NanoFibrillar Cellulose (NFC)
NanoFibrillar Cellulose (NFC) (also referred to as cellulose nanofibers, nanocellulose, microfibrillated, or nanofibrillated cellulose) is generally produced by mechanical defibrillation, usually after pre-treatment such as TEMPO-catalysed oxidation. However, production techniques vary from company to company. This is the main type of nanocellulose produced commercially in Japan. There are a wide variety of potential applications for NFC. The most widely investigated are:

NanoCrystalline Cellulose (NCC)By treating cellulose with concentrated acids known as acid hydrolysis, the amorphous regions can be broken up, thereby producing nano-sized cellulose-based crystals called nanocrystalline cellulose (NCC) or cellulose nanocrystals (CNC). CNC are elongated, rigid and rod-like or whisker-shaped particles with a rectangular cross-section. CNC can be prepared from any cellulose source materials including wood pulp, recycled paper and paperboard, cotton fibres, hemp, flax, bamboo, sugarcane bagasse and other agro-biomass.CNC has a high aspect ratio (length to width ratio) with typical lateral dimensions of 100-200 nanometers (nm) and longitudinal dimension of 5-20 nm. Their dimensions vary depending on the native cellulose source, extraction methods and recovery processes such as hydrolysis time and temperature. CNC has high tensile strength and can be compared to Kevlar fibre in stiffness, making it an excellent material for reinforcement of natural or synthetic matrix polymers. Recently, CNC was used as the filler phase in bio-based polymer matrices to produce bio-based nanocomposite with superior thermal and mechanical properties.CNC has unique rheological properties. Dispersions of CNC at low concentrations provide high viscosity making it a great ingredient as a non-caloric stabilizer for food industry. In addition, CNC are highly shear thinning – a property which is particularly important in different coating applications as well as an ideal value-added bio-material with potential for utilization in stimulation, fracturing and completion fluids.

The main nancellulose producers in Japan are

These companies produce NFC on a pre-commercial and commercial scale. Several nanocellulose-based products have come onto the market in Japan over the past 18 months and producers are increasing production capabilities. They collaborate with various end users in industries ranging from automotive and packaging composites to printed electronics.

In December 2016, Onkyo Corp. launched audio speakers with diaphragms made of CNF. The product was developed in collaboration with Chuetsu Pulp and Paper Co., Ltd. 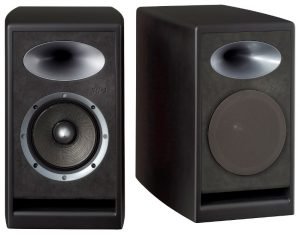 In April 2017, Marubeni Corporation and Chuetsu agreed to jointly develop the application and sales of nanoforest fiber.
The companies claim that the nanoforest fiber is five times as light and five times as strong as steel and could be used in building materials, electronic devices, and cosmetics. Marubeni has established the CNF Business Incubation Section in its Wood Chip & Pulp Department. Marubeni is working to develop new applications of CNF and expand sales channels by fully utilizing the customer network it has established through its chemical and paper & pulp business. Chuetsu has opened a commercial cellulose nanofiber (CNF) plant at its Kawachi plant in Kagoshima prefecture. The plant can produce 100 tonnes/yr of nanoforest fiber.

Daio Paper Corporation
The company has launched a paper toilet cleaner made from cellluose nanofibers (CNF). The company says CNF’s ultrafine fiber composition means that the product has the capacity to eliminate bacteria and dirt around toilets that cannot be seen by the naked eye. The product is also said to be much harder to tear than conventional paper cleaners for toilets. 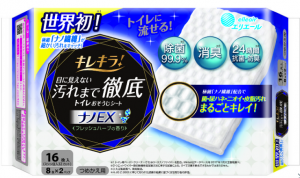 DKS Co. Ltd.
DKS is developing rheology modifiers using cellulose nanofibers. They produce a 2% cellulose nanofibril suspension under the brand name RHEOCRYSTA, developed with Professor Akira Isogai (University of Tokyo).
The product is only available for Japanese domestic market and not for any other oversea market at this moment. RHEOCRYSTA has highly thickening ability and a high thixotropy index. This unique property allows the formulation of a ‘sprayable gel’. 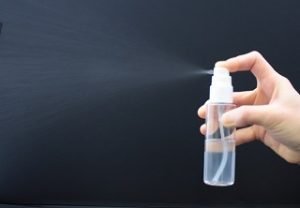 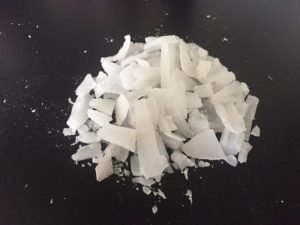 One of the problems with CNF that is commonly encountered by various researchers around the world is its high hydrophilicity, its numerous hydroxyl groups, and the consequent large number of water molecules bound to it, which pose difficulties in mixing it with most resins that are hydrophobic.
To address the above problems, Fuji Pigment Co., Ltd. has established a manufacturing process for mixing and dispersing CNF in various types of resins.
Fuji Pigment Co., Ltd. will supply CNF in masterbatch solid form and as dispersions in water and liquid organic solvents.

Nippon Paper Industries
Nippon Paper has been participating in the development of CNFRP as a member of the Kyoto University-led project funded by the New Energy and Industrial Technology Development Organization (NEDO), a national research and development corporation.
In April 2015, the company announced they had succeeded in the practical realization of functional sheets using TEMPO oxidized CNF. In October 2015 the company launched the “Hada Care Acty” series adult diapers incorporating cellulose nanofiber deodorant sheets. The company process with the TEMPO catalytic oxidation method, that allows for high concentrations of metal ions and metallic nanoparticles to be attached to the surface of CNF. The company manufacture sheets of CNF incorporating a large amount of metal ions that generate deodorant and antibacterial effects. NPI’s subsidiary, Nippon Paper Crecia Co., commercialize, adult diapers utilizing CNF.
In December 2016, the company announced a demonstration plant at Fuji Mill (Fuji, Shizuoka) to promote practical applications of CNF-reinforced resin.
In July 2017, the company announced the completion of the construction of a demonstration plant for cellulose nanofiber (CNF)-reinforced plastic (CNFRP) at the Fuji Mill (Fuji, Shizuoka). The facility produces CNFRPs by mixing CNF and plastics. 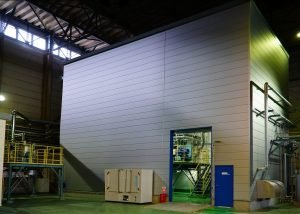 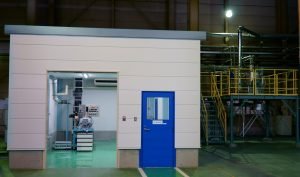 The annual production of CNF-reinforced resin will be more than 10 tons. Samples will be provided for various area of industries, including automobiles, building materials, and home appliances.
The Company also produces CNF at the Ishinomaki mill since April 2017. The facility is the world’s largest for CNF with a capacity of 500 tons per year of TEMPO ((2,2,6,6-Tetramethylpiperidin-1-yl)oxyl) oxidized CNF.
“We’re going to grow CNF into a new pillar of our business. This year is going to be an extremely important one for us,” Nippon President Fumio Manoshiro said at an opening ceremony at the Ishinomaki plant
The CNF from the Ishinomaki mill is used in a range of industrial applications such as functional additives and nanocomposite materials, as well as functional sheets. The Company will operate a production plant for CM-CNF for additive applications such as foods and cosmetics at the Gotsu Mill from September 2017.
Parts of this capacity will be used internally as a deodorizer and odor reducer (antimicrobial) in adult diapers.
According to Nippon their 30 ton per annum facility was running at full capacity after sales of the company’s first commercial product, adult diapers, exceeded expectations. 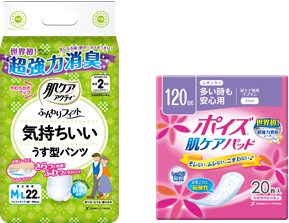 Oji Holdings
The company has a 40 tons per annum demonstration plant for new phosphate esterification process. In collaboration with Mitsubishi Chemical Corporation the company have developed a continuous process for producing CNF transparent sheets. Oji provides the papermaking technology and Mitsubishi provides the chemical treatment technology.
In April 2017, the company announced the development of a CNF transparent sheet product “AUROVEIL 3D”. In June 2017, unveiled “AUROVISCOTM”, a thickener of car chemicals for consumers. The company has succeeded in development of CNF powder that is dispersible in various types of organic solvent. The development enables the company to disperse CNF in various types of organic solvent which conventional CNF has not achieved. Its dispersion has high transparency and high viscosity, and therefore it can be expected to be applied to paints, inks, and polymer synthesis.
Oji is currently trying to accelerate commercialization of the product in a wider range of business fields and create new markets by commencing distribution of these development samples. In January 2017, the company started a pilot faciliity for CNF production with a 40 tpa production capacity at Oji Paper’s Tomioka Mill, located in Anan city, Tokushima prefecture of Japan. 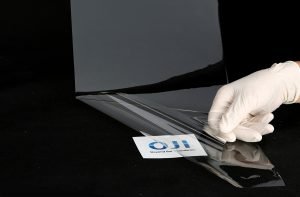