The global market for quantum dots (QD) will grow significantly in the next 18 months. QD Vision and Nanosys have developed scalable solution production processes and are partnering with multi-national OEMs to use QDs in displays for consumer products. Products, such as tablets and high-end TVs incorporating QDs are already available and will be rolled-out into mass produced TVs by the middle of 2015. Light emitting diodes (LEDs) and displays utilizing QDs can be made ultra-thin, on flexible substrates and thus produced at a much lower cost.
Quantum dots used in LCD films are typically cadmium selenide (CdSe)/Zinc sulphide (ZnS) core/shell nanocrystals. CdSe/ZnS quantum dots are optimized to deliver high quantum efficiency as well as to meet the lifetime requirements in display applications. The high quantum efficiency, typically >88%, is necessary for QD film based backlights to deliver higher power efficiency (12% – 45% more energy efficient than traditional LED-LCDs for colour gamut sizes from 70% NTSC to 100% NTSC). Nanoco and other manufacturers have developed cadmium-free QDs, partially to circumvent restrictions on the use of cadmium in certain markets. Cadmium-based QD materials are subject to regulation limitations in a number of global regulatory environments, which may hinder their uptake in certain applications.
However, QDs are beginning to penetrate mainstream markets as optical down-converters and recent legislation will likely accelerate their marketability. The market up to 2013 has mainly catered to specialized applications, with a small number of companies selling QDs directly to researchers, using the particles to develop their own products or licensing their technologies to partners. Recent product launches featuring QDs have changed the commercial picture. Sony’s 2013 line of Triluminos liquid crystal display (LCD) televisions use edge-mounted red and green QDs from QD Vision to optically down-convert some of the television’s blue LED backlight.

Samsung has produced a full-colour QD panel as a potential replacement for LCD (although QDs are more likely to be easily incorporated into existing LCD design) and OLED (the main competition for QD-TVs). When compared to LCD, quantum dots use fifth of the power. In comparison to OLEDs, QDs are brighter, will eventually have a longer lifespan, and cost half as much to make. Samsung plans to launch a Quantum-dot LED TV (QLED-TV) in 2014-2015. They have cancelled plans for an OLED mass production facility due to production cost issues. The company released an OLED-TV onto the US market in 2013, but the large price tag ($14,700 for a 55-inch model) deterred consumers.
LG Electronics has partnered with QD Vision to develop a QLED-TV, and like Samsung are potentially set to begin mass production. In early 2013, 3M and Nanosys introduced a prototype of quantum dot enhancement film (QDEF) targeted at LCD manufacturers which has now been incorporated into commercially available products. Samsung and LG Display are currently the two largest global LCD panel providers.
Sony and Panasonic are also developing QLED technology to be used in UHD TV, as is Taiwan LCD manufacturer AU Optronics. Apple has filed a number of QD display patents over the past year.

Partnerships
Most QD manufacturers have established partnerships and collaborations as a key strategy so that they can share the expertise to develop better QD based products and solutions. Key partnerships include:
• Nanoco with Dow Electronic Materials for development of Cadmium-free Quantum Dots in consumer electronics. They also have partnerships with LG Electronic, Tokyo Electron (solar) and Osram (lighting).
• Nanophotonica with five leading display manufacturers.
• Nanosys with LG and Samsung.
• Qlight and Merck.
• Storedot with Samsung.

Market growth
Most large consumer electronics companies are confident QD TVs will hit the mass market in the next 12-18 months. Some sources anticipate penetration of 20-50% in the LCD market in the next 3-5 years.
The use of QDs in LCD displays is also likely to grow significantly in smartphones (15-25% growth) and will likely outstrip TVs in terms of growth. Use in tablets will also increase greatly in the next five years (15-20% growth). The Kindle Fire HDX 7 was first ever mobile device to feature a quantum-dot-enhanced display, produced by 3M in collaboration with Nanosys, Inc. Due to the size of these screens, the amount of QDs used is considerably smaller than TV displays.

Recent regulation
In the European Union (EU), Cadmium-based QD materials are subject to the RoHS (Regulation on Hazardous Substances) Act and REACH. Sony TV’s Cadmium containment in their Triluminos TV range is compliant to RoHS, but recycling and disposal process is still a potential issue and has impacted its acceptance in U.S. and EU.
A number of QD manufacturers and product developers sought RoHS exemptions to their use in consumer applications. In 2014, the EU offered a temporary exemption for the use of cadmium-based Quantum Dots for display applications.
After a six-month review process it was concluded that the use of Cadmium in QD films used for solid state lighting and display lighting applications would not weaken the environmental and health protection afforded by the REACH Regulation. An Exemption was recommended allowing the use of Cd-containing quantum dots in display applications. The recommendation stated that cadmium was allowed for use
“in components for display lighting applications, containing downshifting cadmium based semiconductor nanocrystal quantum dots, where the cadmium per display screen area is limited to less than 0.2 ug/mm2”. Therefore all currently shipping and planned display products using QDs are compliant by a significant margin. The exemption has been extended until 2017 and only applies to QDs for display applications (http://rohs.exemptions.oeko.info/fileadmin/user_upload/RoHS_IX/20140422_RoHS2_Evaluation_Ex_Requests_2013-1-5_final.pdf).
The QD film in an LCD application contains up to 20 μg of Cadmium per cm2 of screen area, which is contained within a physical device. Therefore disposal, according to some companies, it is unlikely to be environmentally hazardous. 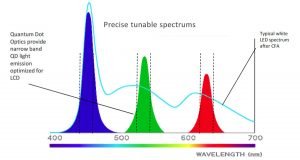 Figure 1: The light-blue curve represents a typical spectrum from a conventional white-LED LCD TV. With quantum dots, the spectrum is tunable to any colors of red, green, and blue, and each color is limited to a narrow band. (Courtesy SMPTE and QD Vision)

With the increased market pull and consumer demand for high colour gamut TV, producers are ramping up their activity to bring new UltraHD/4K sets to market this year. Although QD-TVs are coming to market they face competition from Mn 4+ red phosphor powder enabled products. These products consists of red phosphor and blue green phosphor powders combined with blue chips and are touted to reach 100% NTSC, and SRGB will also surpass 100%. General Electric possesses a Mn 4+ red phosphor patent, which they have authorized Nichia and Sharp to use.

Nanosys expands into a new, high-capacity production facility in Milpitas, California. The 60,000 square foot facility will produce over 1,000 kilograms of quantum dots per year.

3M announces it is in the final stages of scale-up for its new 3MTM Quantum Dot Enhancement Film (QDEF).

Nanosys, Inc. announces LMS Co., Ltd. as the second major supplier of optical films based on its proprietary Quantum Dot Enhancement Film (QDEF) light emitting technology. LMS, based in South Korea and one of the world’s leading producers of optical films for displays, has been qualified by Nanosys to utilize QDEF technology for its Quantum Light Accumulation Sheet (QLAS).

The company has an agreement with Nanosys to produce QD films for displays. They have produced quantum dot enhancement film (http://solutions.3m.com/3MContentRetrievalAPI/BlobServlet?lmd=1383547134000&locale=en_US&assetType=MMM_Image&assetId=1361748701374&blobAttribute=ImageFile). The Asus Zenbook NX500 laptop has a 4K UHD 3M Quantum Dot Enhancement Film (QDEF) touchscreen display. Asus claims that not only does this increase resolution, but it enables an ultra-wide colour gamut of 100 per cent NTSC, 108 per cent Adobe RGB and 146 per cent sRGB.

The company has agreements with QD Vision and Nanosys to develop QD displays. They are expected to bring a QD-TV to market within the next 12 months.

The company has an agreement with Dow Chemical for cadmium-free quantum dots in LCD displays. They have agreements with a number of other OEMs in a variety of markets. The company CFQD® quantum dot technology is expected in TVs in 2014 and in solid-state lighting applications in 2015.

QDEF™ and QuantumRail™ are composed of Nanosys’ proprietary, high efficiency quantum dot phosphors. Currently, Nanosys is focused on commercializing its quantum dot and silicon composite anode materials for the LED LCD and lithium ion battery industries and has agreements with a number of display manufacturers.

The company’s Quantum Light™ product platform was used in Sony’s 2013 Triluminos TVs. The 2014 version no longer uses the company’s QDs.

www.samsung.comThe company has a number of agreements with QD manufacturers. It is anticipated that they will bring out a QD-TV in late 2014, early 2015.

The company’s 2013 range of Triluminos TVs incorporate QD Vision’s quantum dots. According to industry sources, the product’s high cost and use of Cadmium (Cd) impacted the product’s acceptance in the European and U.S. market.