Trending
You are at:Home»ARTICLES»Innovation in Nanoparticle Additives for Water-Based Lubricants
By admin on June 24, 2020 ARTICLES

The use of mechanical systems and machinery is one of the cornerstones of a modern industrialized economy. Maintaining a long operation life with minimal wear and loss of performance is a crucial concern for any industry. Along with designing more efficient machines and mechanisms, lubrication is a core approach to addressing this concern. It is part of a field of research and industry of its own – tribology. By applying a lubricating agent, reduced wear and extended operation life can be achieved by minimizing friction forces on contact surfaces, and, as a result, reducing mechanical stresses on machine components and increasing operation efficiency [1]. From engine oils to drilling fluids, lubrication agents like oils and greases remain a vital component of industrial processes with an estimated industry worth of $164.3 billion as of 2019. Experts project that by 2024, the lubricant industry, pushed by innovation and growing demand in the transportation industry and other industrial sectors, will  grow to $188 billion [2].

One of the fundamental drivers for innovation within the lubricant industry in what could be considered as the “Third Industrial Revolution” and includes broad technological developments, such as the rise of electric vehicles, automation, and 3D printing, is the expanding application of nanotechnology [3]. The nanotechnology market has grown from $26 billion in 2014 to $48.9 billion in 2017 and has applications in a variety of major industries ranging from pharmaceuticals to semiconductors to the lubricant industry [4,5]. Following the latest market trends of cost optimization, environmental friendliness, as well as higher reliability and performance, end-users expect improved tribological properties (anti-wear, anti-friction, extreme pressure protection, etc.) from modern lubricants. Today, nanotechnology is a leading method for achieving the desired properties in the form of nano-additives [3].

Nano-additives are designed to enhance the tribological performance of the lubricant by reducing friction (or the CoF, to be precise) and forming a protective layer(s) on the contacting surfaces. Such layers are called tribofilms; they are formed by chemical modification when friction forces arise during mechanical operation after physical and/or chemical adsorption of the tribologically active compounds onto the component surface [6]. Protective layers of molybdenum disulfide (MoS2) are commonly sought after due to this material’s capacity of reducing CoF and is traditionally achieved through additives containing MoS2 or molybdenum complexes containing sulfur compounds such as dithiocarbamate and phosphorodithioate [6,7]. Most of these compounds are difficult to synthesize and their production process involves toxic chemicals. It is a concern, especially when the market is leaning more towards eco-friendlier, sustainable, and scalable products. For example, the use of phosphorodithioates in motor oil applications may damage catalytic converters due to the presence of phosphorus.

Inorganic nanoparticles are a better alternative. They do not pose the same environmental and toxicity concerns during production as dithiocarbamates or phosphorodithioates and do not require a period of increased friction/heat to generate MxS2 (Mx – metal) tribofilms meaning they can reduce friction and protect surfaces with no startup time. Depending on their morphology and composition, specifically engineered inorganic nanoparticles may have multiple mechanisms to improve lubricant’s tribological behavior, such as the rolling effect, surface correction, and polishing [6,8]. Designing nanoparticles with a spherical morphology can induce a rolling effect similar to that of a ball bearing mechanism in which the spherical nanoparticles applied to the friction surface are capable of rolling in between the contacting surfaces during operation to reduce the coefficient of friction [7]. The surface correction effect describes how the nanoparticle deposits part of itself to fill in asperities and surface irregularities while forming a protective microlayer. Lastly, the polishing effect refers to abrasive effects while under friction forces in which the nanoparticle physically smoothes out the friction surface [9,10]. Designing inorganic nanoparticle additives with these mechanisms in mind is indispensable to developing innovative lubricants that meet the increasing demands for the high-performing lubrication.

To take advantage of the tribological benefits of inorganic nanoparticles, they should be mixed with a proper base substance that together will form the lubricating agent. Their physical state can categorize these agents from solid and semi-solid to liquid and gas. Solid based lubricants include, but are not limited to, graphite, WS2 and MoS2 powders/coatings. Oil-based greases are a good example of a semi-solid lubricant.  A liquid lubricant with typically 90 percent oil and up to 10 percent additives serves for reduced friction and wear, and resistance to corrosion whereas nitrogen and helium are the typical gaseous lubricants.

Liquid lubricants may also be composed of water as a base substance instead of oil, thereby resulting in a lubricant that takes advantage of water’s material abundance and is environmentally benign. However, there is a common perception that water-based lubricants heat up too fast and may lead to metal parts rusting. On the contrary, water will not burn like oil and will reduce heat more effectively. Therefore, the properties of the water-based drilling or metalworking fluid depend on the additives. This is where inorganic nano-particles may play a significant role thanks to their tribological properties.  A water-based lubricant with specially designed inorganic nanoparticle additives would do away with the limited supply and environmental hazards of oil-based formulations while matching/exceeding its tribological performance and retaining the environmental safety and ease of handling of water. The lubricating properties of inorganic nanoparticles depend on their morphology and dispersibility in the liquid (in our case – solvent) rather than the viscosity of the solution itself, indicating its overall versatility and suitability for water-based lubricant applications [8].

Water-based lubricants formulated with inorganic nanoparticle additives have tremendous potential in improving the performance of a wide range of industrial lubricants, including fire-resistant fluids, drilling fluids, and metalworking fluids (MWF’s). MWF’s, in particular, are an excellent example of the net benefits that a water-based lubricant can have.

For water-based lubricant applications, numerous nanoparticle shapes and compositions have been investigated and are commercially available. Liu Y H, et al characterized the performance of graphene oxide and diamond nanoparticles noting a sharp decrease of the COF of Si3N4 sliding against of Al2O3 from 0.6 to as low as 0.01 after 250s while H. Wu et al. found a decrease of 0.5 to 0.25 and significant wear reduction from TiO2 nanoparticles in a 0.8% wt solution with water [8,12]. Among commercially available options, inorganic fullerene-like tungsten disulfide (IF-WS2) nanoparticles such as those produced by Nanotech Industrial Solutions (NIS) are promising due to excellent tribological capabilities resulting from their spherical shape, lamellar structure, and submicron size. The spherical fullerene-like shape allows for the rolling effect mechanism of lowering the coefficient of friction and serves to impart high elasticity to withstand extreme pressures (EP) while preventing micro cracks and pitting. Simultaneously, its submicron size (20-280 nm) allows for the surface correction effect by filling in asperities thereby smoothing the friction surface and preventing crack propagation. Investigations into the performance of IF-WS2 additives in water-based lubricant formulations  at different concentrations in comparison to other lubricants were conducted on samples prepared as described in Figure 2 below.

When tested against Group II base oil  lubricant SN150, IF-WS2 water-based lubricants were found to withstand up to 1,000 Kgf of Weld load depending on the percent composition in water compared to the 126 Kgf of SN150 under Four Ball EP testing conditions as specified by ASTM D2783 [13]. Compared to samples of commercial emulsions and semisynthetic fluids, samples incorporating IF-WS2 particles were found to withstand more than double the load under the same testing conditions as shown in Fig. 3. In addition, these nanoparticles can exfoliate under friction loads to Impart a single or multi-layer tribofilm onto the friction surface providing additional protection thereby enhancing wear reduction and lowering the COF as load increases as can be shown by the progressively lower COF values from 600N to 1200N on the Stribeck Curve of Sample 5 in Fig. 4 [13]. 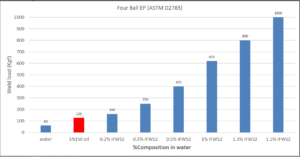 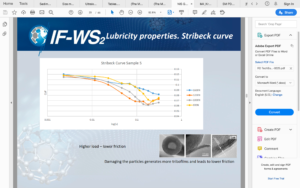 When compared with samples of commercially available emulsion/semisynthetic fluid lubricants, IF-WS2 water-based lubricants exhibited lower CoF values and reduced wear as indicated in  Figure 6. Application of IF-WS2 water-based lubricant reduced COF down to approximately 0.09 with no significant “break-in” CoF compared to commercial emulsions/semi synthetic lubricants (samples 6 and 7)  when testing in accordance to ASTM G99 under 1000N load and angular velocity of 0.3 m/s. The combination of reduced CoF and application of a protective tribofilm translated into reduced wear values of 1.1 mm for the Ball on disc wear test (ASTM G99 under 1000N) and 1.13 for the Four ball wear test (ASTM D4172),  for sample 4 of IF-WS2 water-based lubricant. This matched the performance of commercial emulsion lubricant (sample 6) for the Ball on disc wear tests and exceeded both commercial emulsion and semisynthetic lubricants (samples 6 and 7). In comparison to the reported values of TiO2 and graphene oxide, the IF-WS2 nanoparticles exhibited lower minimum CoF than TiO2 (COF of 0.5 to 0.25) and higher than graphene oxide (0.6 to 0.01), but with much lower initial CoF as shown by the CoF curves of samples 2, 3, and 4 starting with a CoF of 0.12 down to around 0.09 indicating superior lubricity. In addition, a combination of a concentrate of 4% commercial emulsion and 0.54% IF-WS2 concentrate resulting in a water-based lubricant with 0.27% IF-WS2 by weight represented by sample 5 showed the lowest ball on disc wear of 0.97mm and second lowest 4 ball wear of 1.15mm while having the lowest COF of approximately 0.08. In nearly all cases, the water-based lubricants incorporating IF-WS2 nanoparticles showed a smaller wear and a lower COF while being capable of operating under higher pressures in comparison to traditional oil-based lubricants. In addition, less tribologically active material (0.27% IF-WS2 vs 6% of commercial emulsion/semi-synthetic lubricant) is required indicating excellent efficiency and opportunities for lower net machining and process costs [13]. 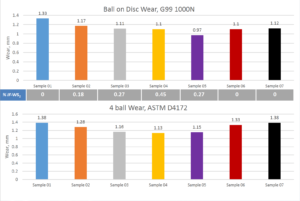 To test this potential application, 4% conventional emulsion based lubricant and 0.54% IF-WS2 concentrate were used to synthesize a sample of 0.27% IF-WS2 water based lubricant that was compared against a 6% in H2O commercially available semisynthetic MWF. A field trial was performed utilizing both lubricants to lubricate a carbide tip tool operating under high speed while temperature, noise levels, and lubricity were measured. The IF-WS2 water based lubricant was found to have lowered operating temperatures by 80%, improved lubricity by 34%, and lowered noise levels by 4.9% in comparison to the commercially available lubricant as depicted in Fig. 7 [13]. 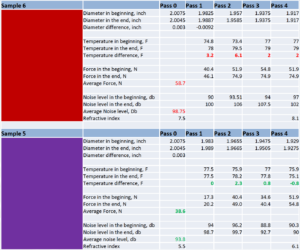 When applied to commercially available multitool systems such as the Nakamura NTY3 over a period of 24 days, tribological improvements on a single tool scale translated to nearly double the parts produced and the elimination of an entire maintenance cycle as shown in Fig. 8 [13]. 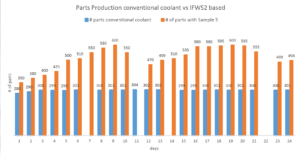 Dr. Raj Shah is an elected fellow of RSC, InstMC ,AIC, STLE, NLGI, IChemE, CMI and El. He is Chartered Petroleum Engineer from the Energy Institute, a chartered chemical engineer from Institution of Chemical Engineers,  a Fellow member of the Chartered Management Institute , London, an eminent engineer with Tau beta pi engineering honor society  and a Chartered scientist from the science council. Currently, he is a Director at Koehler Instrument Company located in Long Island, NY where he has been for 25 years. Contact: rshah@koehlerinstrument.com

Mr. John Calderon is part of a thriving internship program at Koehler Instrument company in Holtsville, and a student of Chemical Engineering at Stony brook university, Long island, where Dr. Shah is the current chair of the external advisory board of directors.

Dr. George Diloyan is CEO of NIS Inc. He holds PhD in Mechanical Engineering from Temple University with a focus on nano technology, electrochemistry and material science as well as two MS degrees in Physics and Computer science. He has extensive experience with applications of nano materials to solve hardcore industrial problems, knowledge of particles agglomeration and degradation mechanisms.