Trending
You are at:Home»ARTICLES»Nanomaterials in Threat Detection and Prevention
By admin on May 1, 2015 ARTICLES, ISSUE 34, LATEST ISSUE, NANOTECH MARKETS 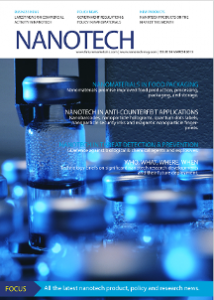 Nanomaterials in defence and security

Defence against biological and chemical agents and environmental security are viewed as key priority areas for global security. Chemical and biological threats pose a significant concern not only to military personnel but also to individuals and groups. Nanomaterials and nanotechnology can play a vital role in the detection and decontamination of chemical and biological threat agents. Nanosensors are allowing for improved detection, decontamination and protection against chemical, bio-agents and explosive threats.